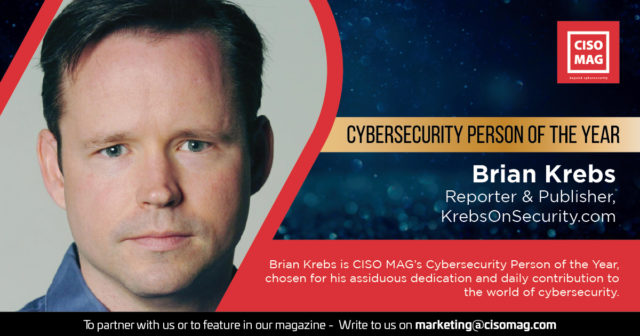 It’s that time of the year when CISO MAG editors get together to reminisce about all the big news and events that occurred during the year. Last month, our editors created a rundown on everything that happened—the good and the bad. In the December issue, we present one quick read on the year at its entirety with a focus on what made 2019 different from past years. In addition to focusing on the most prominent attacks of the year, we also talk about the biggest fines of the year, the mega cybersecurity acquisitions of the year, the most promising startups of the year, and the best cybersecurity solutions of the year. For the first time, we named the Cybersecurity Person of the Year. It’s a person who has over the years been committed to bringing awareness into the realm of cybersecurity–to whom the information security industry is profoundly indebted.

Brian Krebs is CISO MAG’s Cybersecurity Person of the Year, chosen for his assiduous dedication and daily contribution to the world of cybersecurity.

Thanks for informing us daily, Brian!

Brian Krebs is one of the most venerated cybersecurity influencers in the world. Krebs is the editor of a daily blog, KrebsOnSecurity.com, covering computer security and cybercrime. A journalist by profession, Brian worked as a reporter for The Washington Post from 1995 to 2009, authoring more than 1,300 blog posts for the Security Fix blog. He also wrote hundreds of stories for washingtonpost.com and The Washington Post newspaper, including eight front-page stories in the dead-tree edition and a Post Magazine cover piece on botnet operators.

His noteworthy reportage includes the Target Corporation breach, where 40 million credit cards of users were compromised. He was also instrumental in identifying the Ukrainian man who was behind a primary black-market site selling Target customers’ credit and debit card information. His book Spam Nation: The Inside Story of Organized Cybercrime – from Global Epidemic to Your Front Door won the PROSE Award in 2015.

In 2019, Brian Krebs’ Krebs on Security broke the news about one of the biggest data leaks. He reported about insurance giant First American Financial Corp., which leaked hundreds of millions of documents related to mortgage deals going back to 2003. The leak included digitized records of almost 885 million people, “including bank account numbers and statements, mortgage and tax records, Social Security numbers, wire transaction receipts, and drivers’ license images—were all available without authentication to anyone with a Web browser.

CISO MAG also recognizes two other persons for their tremendous contributions to cybersecurity. They are Rik Ferguson, Vice President Security Research at Trend Micro and Troy Hunt, an expert on web security and author of the data breach search website Have I Been Pwned?

Download CISO MAG December 2019 to read about the CISO MAG Editor’s choice for the best security technology, the Cybersecurity Persons of the year, and the biggest news events of the year.